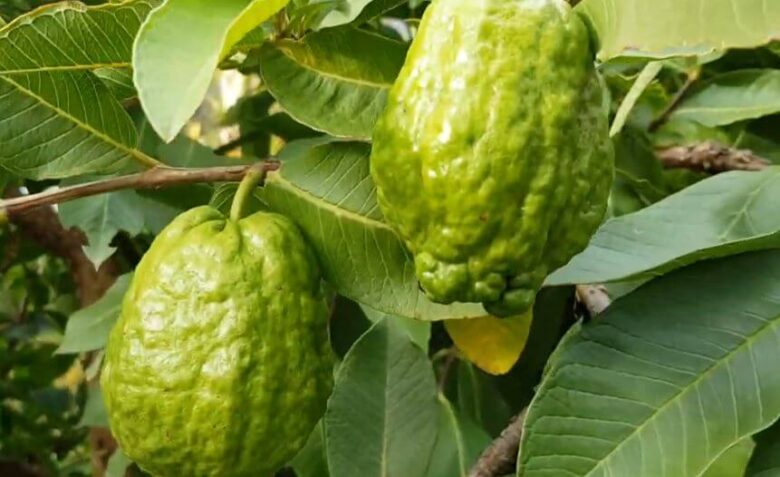 Both guava and apple are great sources of nutrients. However, when compared with apple, guava ranks high in protein, fat, and carbohydrates. Guava also contains less sugar. On the other hand, apples contain a fewer amount of vitamins and minerals when compared with guava.

For more detailed information about the comparison between Guava vs Apple, read on.

Guava: Guava is believed to be originated from Mexico, Central America, Northern, and Southern Americas.  Learn more about guava origin.

Apple: Apple is believed to be originated from Central Asia. It was grown for many years in Asia and some European countries.

Guava: Guava: guava is one of the flowering plants and members of the Myrtle family. Guava belongs to the genus Psidium and species guajava. The scientific name of guava is known as Psidium guajava.  Learn more about the guava classification.

Apple: Apple is a common flowering plant in the family Rosaceae. It belongs to the genus Malus and species domestica. The scientific name is known as Malus domestica.

Type: both guava and Apple are fruit trees.

Texture: guava is considered crispy in texture while Apple is crunchy.

Shape: guava is round to oval while Apple is round.

Taste: guava is sweet to sour in taste while apple is sweet-sour.

Seasons: both guava and Apple are all seasons’ crops. You can learn more about guava season here.

Soil pH: guava thrives well within pH range 4.5 to 7 while Apple grows in pH range between 6 and 7.

Climate: guava is a crop that loves Sunny climatic conditions whole Apple is a cool-weather crop.

Guava: guava is used as an ornamental tree to beautify the environment. Guava is also used to control desertification. The e fruits of guava provide food to many birds and mammals.

Apple: apple fruits are a great source of food for birds and mammals. Apple trees are also used for ornamental purposes in landscape design.

Guava: Guava is used during pregnancy to supplement women that are deficient in folate. Guava fruits are also used for the management of weight gain. (You can learn more about the health benefits of guava for weight loss here.)

Apple: Apple can help improve digestion. This is due to prebiotic effects in promoting good gut bacteria. Apple was also shown to lower the risk of diabetes, obesity, and heart problems. Learn more about the health benefits of Apple here and here.

It is important to compare the similarities and differences between Apple vs Guava as both the fruits have a different nutritional value. This comparison is done on the basis of their vitamins and minerals. In this article, I also compare the calories of both fruits alongside benefits as well as characteristics, making it easier for us to choose the best fruit for our diet. I hope you will find the article helpful. Let me know if you have any questions.