Guava Cheesecake completely satisfies everyone who have a taste of it. When you make the cheesecake as described below but those you are with are snubbbing and cogitating on what you are trying to do, complete the process and give them a tadte- they’d actually be mouth agape for the next few minutes.

For the topping, you might have to push further.

You are to use an oven to get the best cheesecake you’d ever want. Also, you have to have a cake pan. There are different pans but I’d rather you chose cake pan because it was created and shaped for cake only.

Coming to the crust, you have to mix the crackers you want to use (Grahams) and sugar in a food processor that has a metal blade which grinds the cracker into powder. After the powder has been obtained satisfactorily, add your butter (NOTE: It should be melted butter), turn on and off the food processor repeatedly, just to get the desired thick liquid. Grease your cake pan and pour the crust you blended into the cake pan and make sure it’s even in the pan.

Read also: How to Make Guava Juice Step By Step

Coming to the filling, you have to have cream cheese, that’s sure. Grind the cream cheese with sugar till you’re satisfied with its smoothness and attractiveness. The estimated time for doing this is three minutes.

After you’ve done this, add the number of eggs you want but it must be two at a go. For example, if you wish to use ten eggs, you have to add the first two, second two, third two, fourth two and fifth two until the number is complete.

Blend them together now, you might prefer adding cream or vanilla to yours, it’ll be more tasty – you can. After blending to your satisfaction, add your guava paste and stir meticulously till the guava cubes sever out of the liquid. But if they don’t sever out, you can sever them out by using spatula. Not any other thing.

You’re done with the filling.

Pour the filling into your cake pan and using temperature of 325°F and a calculated time of almost an hour, start baking.

After it’s baked, bring it out of the oven and let it lose its heat of vaporization. You might place it in a cooling rack if you prefer it.

Take note of this:

Find a cakeboard and wrap it with a plastic wrap. Let the cheesecake be in a larger cake pan, then to both sides of the cheeecake, add warm water. Leave it for twenty seconds. Then bring out the cheesecake and let the bottom of the cake pan be dry. Then cover it with cakeboard and turn it upside down. Give it a tap either once or twice, at a time to let the cake become detachable in the pan.

Read also: How to Make Guava Jam Step By Step

With extreme care, lift the cake pan off the prepared cheesecake. Place a cardboard below the cheesecake and make it round then,remove it. 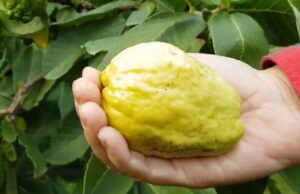