Guava Vs Guayaba Vs Guanabana: The Detailed Comparison In this article, you are going to learn the difference between a guava and guayaba alongside guanabana.

The short answer: both guava and guayaba are the same things. The only difference between the two is phonetic. Guayaba is derived from the Spanish word “guayabo” whereas guava is an English word of the common guava. However, guanabana is totally a different thing. It is known as soursop

Read on to learn more about guava vs guayaba vs guanabana.

Guanabana is not the same thing as guava. It is known as soursop. The fruit produced by guanabana is larger and more greenish than guava. The fruits have spikes and the pulp has white inner flesh. The flavor of guanabana is more like that of cantaloupe with a silky texture.

Guava is known scientifically as Psidium guajava. It is a small tree native to central and southern Americas. The guava tree is an evergreen and grown mainly for its edible fruits and sometimes for its medicinal leaves.

>The Botany Of Guava Plant (Psidium Guajava And Other Species)

As I started explaining above, the word guayaba is obtained from the root word ‘guayaba” which is a Spanish word that stands for guava.

This is the original word that is used by the Arawak Indians for the name guava. These (Arawak Indians) are the natives of Great Antilles and South America.

Related: Guava And Carrot: Are These A Perfect Combination For Health?

Guava has about over 90 different species. Learn more about the species of guava here.

Different languages of the world have their own different names in which they used to identify guava. For instance, in the Arabic language, guava is known as Jwafa. And in Japanese, it is known as guaba. While in Peru, it is called Marathi. And in Tagalog and Punjabi, guava is known as bayabas and amrood respectively.

Tip: learn more about the common names and varieties of guava here

Guava has numerous uses and includes shelter belts to control desertification and for beautification in landscaping. Guava is utilized in both developed and underdeveloped countries as an immediate source of energy. Guava finds a place in many recipes such as salad dressings, jellies, jams, smoothies, juices, and other forms of beverages.

The leaves are also utilized in the prevention and management of many diseases and include body inflammation, infection, diabetes, obesity, heart problems, and more.

Tip: learn more about the health benefits of guava here

In this article, I looked at the difference between guava vs guayaba vs guanabana. I hope you will find this guide useful. Let me know if you have any questions. 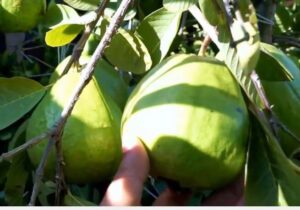 Varieties Of Guava Other facts

How To Use Guava leaves For Black Hair 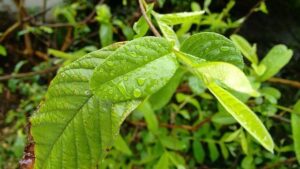 Apple or guava which is better for weight loss