Guava Leaves And InFertility In Men:What Are The Facts And Myths In this article, I’m going to look at the uses of guava leaves for men’s fertility.

Read on to find out detailed information in this step by step guide.

Important: experts recommend this fertility supplement. You can check it here. It is found to quickly boost both women and men fertility and also increases chances of getting pregnancy.

The leaves of guava when extracted by boiling or other organic solvents were shown to help prevent and control male infertility. Numerous in vitro and in vivo research-backed studies made on animals have revealed that guava leaves extract can improve man fertility.

For example, as it was explained in this study,  guava leaves extract improved sperm count in experimental rats with gossypol-induced sperm toxicity.

What is obtained in this experimental study was that 24 experimental wister rats were taken and they were grouped into 4 groups with every group containing 6 wister rats.

One, two, and three groups were administered 14mg/kg daily of free gossypol for 53 days through oral administration.

The experimental rats in groups one, and three were treated through the mouth with 250mg/kg/d and 500mg/kg of guava leaves extract respectively.

The experimental wister rats in group four were only treated with normal saline to serve as a control experiment.

Upon analysis of the result obtained from this study, it showed that there was no significant difference between groups one and four in sperm count.

But, a significant improvement in sperm count was seen in group two when compared with experimental wister rats in group three.

Additionally, the result analysis also revealed that the mean sperm motility for groups one, two, three, and four are 78%, 82%, 30%, and 65% respectively.

Moreover, in a separate study, it was also revealed that the aqueous extract of guava leaves prevented Albino rats from the effects of caffeine-induced sperm toxicity.

Unlike the other study we cited above in sister rats, this study employed 30 matured and healthy albino rats into an experimental model.

Albino rats are animals frequently used in experiments. These types of rats show some similar reproductive characteristics to humans.

These albino rats were grouped into five groups with each group containing six albino rats. The albino rats in group five were marked as a control experiment while the remaining groups were labeled as C, A200, C+A250, and C+A500.

The control group was made up of albino rats that are neither treated with caffeine nor with aqueous guava leaves extract.

The C+A250 group is made up of rats that were given 200mg/kg caffeine and 250mg/kg of aqueous guava leaves extract.

And the C+A500 was made up of albino rats that were treated orally with 200mg/kg of caffeine and 500mg/kg of aqueous guava leaves extract.

The experiment completed within 65 days of oral treatment with both caffeine and aqueous guava leaves extract.

But, albino rats that were left without guava leaves extract treatment revealed a significant reduction in sperm viability, sperm count, and sperm motility.

The result obtained in the study showed an increased abnormality of sperm head in caffeine treated albino rats when compared with the rats within a control group.

Tip: Learn more about the health benefits of guava

How to prepare guava leaves for male infertility

Read also: Can Guava Leaves Boost Sperm?: Here Is What You Need To Know

Read also: How Long Should I Boil Guava Leaves?: Find Out Here

How to use guava leaves for male infertility

If you want to use the prepared guava leaves decoction for male infertility, divide the tea into two cups. You need to drink one guava in the morning and the other one before bedtime. Prepare this decoction daily and stop when you do for 2 weeks.

Tip: Learn more about how to make guava leaves tea

What you need to know about guava leaves for male infertility

Learn more about how to prevent problems when using guava leaves 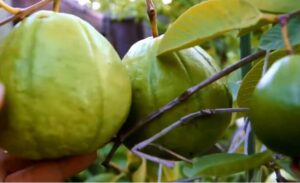